The unique flavor of Tim Tam biscuits is due to the chocolate specially developed for Arnott's with a light caramel flavor. The filling consists of a unique combination of vanilla, butter, and chocolate with a rich chocolate coating. The choices are white, milk and dark chocolate. Dip the cookies in your coffee, tea, milk or chocolate milk and experience the fantastic taste sensation! 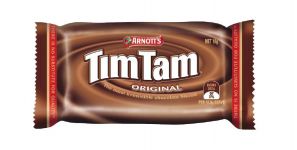 Tim Tam Portion Pack, ideal to put in your bag, this way you can easily enjoy the Tim Tams everywhere!

Yes Tim Tams White are now also available via internet. Have you ever tasted them!!! The most delicious cookie from Australia.

Everyone should add this new flavor to their Tim Tam collection: Murray River Salted Caramel! It is something that you have never tasted before...

Australia's favourite biscuit. Try this cookie and they have to be in your pantry. 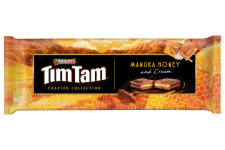 Are you looking for a new Tim Tam flavor? Try the Manuka Honey and Cream! It has a delightful cream centre! 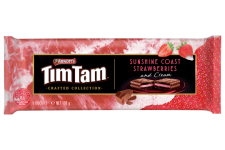 It is going to be a good summer with the Sunshine Coast Strawberries and Cream! Be amazed by the sweet Australian strawberry filling!

Try out the new Tim Tam Gisborne Orange and Dark Choc flavor! The combination of sunkissed oranges and dark chocolate is perfect!

The Tim Tam biscuits are a custom during an Australian coffee break, but now also available in the Netherlands! The biscuits have many names such as Tim Tam Slam, Tim Tam Bomb and Tim Tam Explosion.

The favorite drink to eat with your Tim Tam cookies is number 1 preference: coffee, naturally followed by hot chocolate and Bailey’s In Australia, Port is also popular to use for your Tim Tam Slam.

Who doesn't love our Tim Tam cookies! Millions are sold worldwide! In Australia alone, they eat 45 million packs a year and that includes a substantial production. 3,000 Tim Tam biscuits are produced per minute at the Arnott’s factory in Sydney.  Fortunately Arnott's has several factories including in Newcastle - New South Wales, Adelaide and Brisbane to make all Tim Tam biscuits.  All factories are also needed to produce the different flavors of Tim Tam. There are standard flavors such as: Tim Tam White, Tim Tam Classic Dark, Tim Tam Chewy Caramel and chocolate mint. In recent years we have also encountered special tastes with the strong drinks Tia Maria and Kahlua. A special Tim Tam Raspberry White Choc is made for Valentine's Day.